Can’t get this song outta my mind!

The video clip is from the the movie “Across the Universe” which we watched in DVD last weekend.  For those who haven’t seen the movie yet, it’s a romantic musicale story based on the songs of the Beatles.   Am sure every Beatlemaniac out there have seen this film.   I actually missed out on this when it was shown in 2007 but no regret – am making up for the lost time by watching it over and over again! 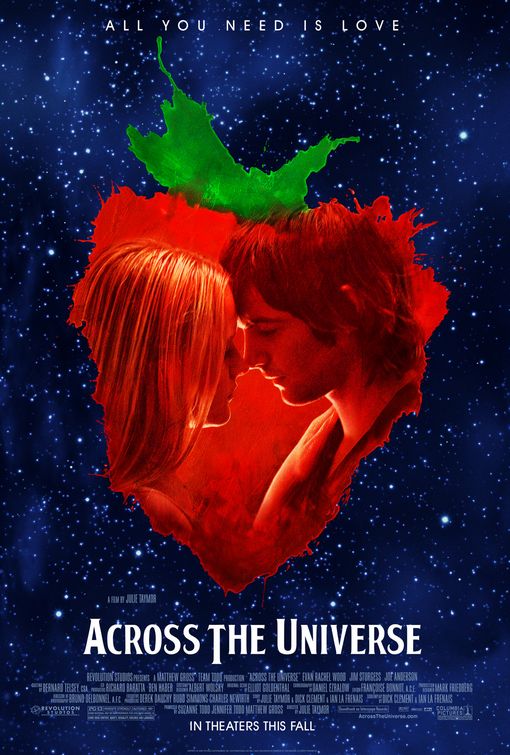 It’s really amazing how they pieced together the lyrics from a diverse set of Beatles songs and came up not with just some cute romance story but a heartwarming one about love and friendship, set against the backdrop of the swinging 60’s and radical 70’s.   Jim Sturgess  (of “One Day”) played “Jude”, the young English lad who came to America to look for his father and Evan Rachel Wood (she has a role in the movie “Ides of March”) played “Lucy”, the privilege, all-American girl who fell in love with Jude.   There are other equally unforgettable characters  like Max, Lucy’s brother and lesbian Prudence who, interestingly, was played by part-Filipino, part-Chinese T.V. Carpio (she’s the Asian girl in the video hiding inside the room).  And oh, watch out  too for the cameo appearances of Joe Cocker (who did “Come Together), Bono (“I Am the Walrus”) and Salma Hayek (who was part of the production number on “Happiness is a Warm Gun”).

All the Beatles songs used in the movie were given fresh arrangements to suit the voice of the characters singing them and the scenes in which they were used.  The addition of MTV-style production numbers made it even more entertaining.   Watch out for “I Want You (She’s so Heavy)” – it rocks!

But it’s the rendition of Dear Prudence among all others which left a “last song syndrome” effect on me.  Maybe it’s the haunting melody or the clarity of the lyrics as sung by the major characters that made it sound so good.

If you haven’t seen this film yet, I highly suggest that you do.  It’s one of the best films I’ve seen in a long time (and not because I love the Beatles!).